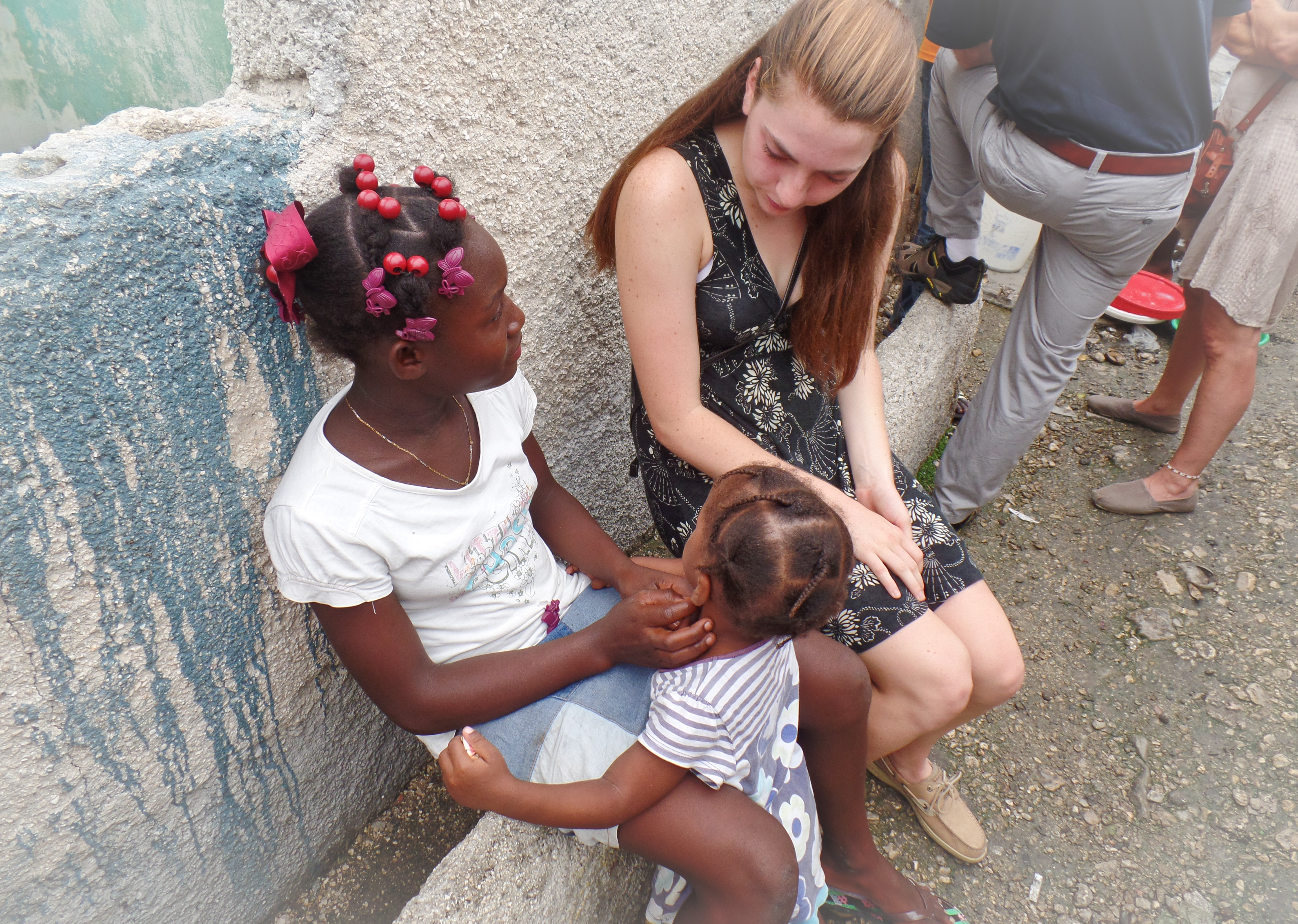 Grace Harrison is a high school senior from Montclair, NJ, who recently visited the Lamp’s clinic.  She wrote this piece as a college entrance essay.

I stepped out of the van in Cité Soleil, Haiti. The powerful odors of pigs, dogs, goats and strewn garbage assaulted my senses.  I saw homes created from concrete slabs and children playing with empty bottles tied to strings, others splashing barefoot in filthy puddles. I saw a woman selling mud cookies, which hungry people use to trick their stomachs into feeling full.  Two teenage boys played dominos, one with two guns strapped to his waist.
I followed the footsteps in front of me to the Lamp for Haiti. The safe, clean health clinic was an oasis. Dozens of people waited for care, including pregnant teenagers younger than me, elderly people who have lived a long hard life, and sick people with nowhere else to go. Here I was, a healthy teenager from New Jersey, in an impoverished community in Port-Au-Prince. I expected resentment, and yet a woman who had almost nothing shared her chestnuts with me and another woman reached out to hug me tightly.
The next day I watched two little girls sitting in a pile of indescribable garbage. We stared at each other as people from two different worlds. It felt like there was an unspoken agreement to keep a comfortable distance. And yet, when one of the girls began to cry I broke that distance and walked over to rub her back. She reached her arms around my neck and I lifted her off the ground. As she rested her tiny head on my chest, her tears stopped. Mine began. After a few moments between us I put her bare feet back on the dangerous, debris filled ground. Walking away from her took all my strength. Her face will remain with me for the rest of my life.
That same day I joined nurses, doctors and Lamp supporters for a celebration of fried plantains and grilled goat that followed the annual board meeting. The manager of the Lamp, named Benoit, kissed me and said, “Thank you, Grace. You are helping to save lives. We appreciate all you have done.” I was humbled because nothing I did compares to what the Lamp employees, both Haitian and American, accomplish every day.
I had learned about The Lamp three years ago from Dr. Jim Morgan, a physician in my town. I was moved by his words and knew I had to help. But how could a 16-year-old in New Jersey help people in Haiti?  I felt powerless. Then, one day in chorus class, as I listened to friends belt out high notes, I thought there must be a way to use our love of music to help others. I invited my friends to sing, borrowed microphones and cables, reached out to businesses for donations and sent out invitations to my Backyard Lamp for Haiti Concert.  Dr. Morgan came to speak and told us that Cité Soleil was the only place in the world Mother Theresa called more impoverished than Calcutta. The event raised more than $3000. The next year I organized my second concert, raising total contributions to $7000. Then in October Dr. Morgan invited me to see firsthand how the funds I raised were helping. I got a typhoid shot and used my babysitting money to book a flight.
Can a person’s life change in four days? Mine did. Haiti changed how I see my place in the world. Organizing my backyard concert made me realize I can make a difference and being in Haiti made me realize that I must. After just three and a half hours on the plane, I was back home drinking clean water from the tap. Guilt coated my bones that night as I put the air conditioning on and fell asleep thinking of the girl I had held a world away.