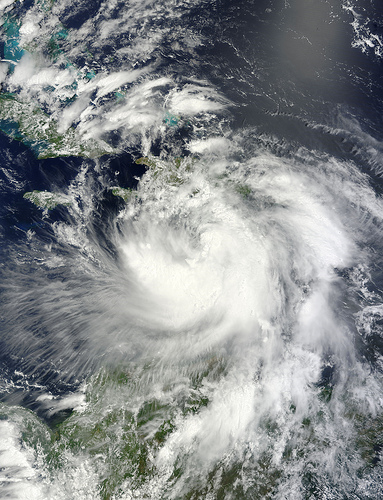 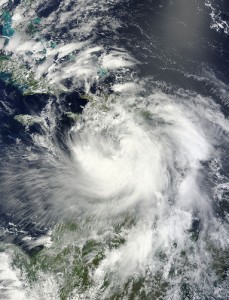 Hurricane Isaac arrived in Port-au-Prince late at night on Friday, August 25th.  I was as safe as could be, on the bottom floor of a two storey cement house but others were much more vulnerable.  I had never been in a hurricane before: the sound of the wind was strange — wind simply shouldn’t sound like that.  The violence contained in that sound was terribly unnerving.  I could only imagine, with a sick feeling, the impact on the tens of thousands of people who still live in tent cities across Port-au-Prince.

Marc, who lives in this house, had received a phone call just before the main storm arrived: the roof had begun to lift off of the house where his wife and children were temporarily staying.  He went off into the howling darkness with his little flashlight to help.  There was very little rain at that point, the air and the house were full of dust.  I could hear heavy objects falling all around the house and the sound of at least two tin roofs crinkling and tearing away from their supports.  Near morning the wind lessened and the rain began.

The city seemed remarkably unchanged the next day although the sounds of people repairing their homes was everywhere.  Fitting, I suppose; surviving crises is a necessary skill here in Haiti.

Marc came back to say that he had moved his family to a safer place.  He had spent the night at the damaged house, comforting his kids.  Everything in the house had been ruined by the wind and rain.  He had rescued a neighborhood boy whom he found hanging from electrical cables, two storeys above the ground.  The boy had been asleep in his bed when the wind blew the wall of his home away.  His mattress was on the ground below him.  On the way home, Marc passed two bodies, still not claimed by relatives.

News reports say that 19 people died in Haiti as a result of the storm but this is woeful under-reporting.  The storm passed over the entire country.  Only deaths that are reported to authorities are ever recorded.

On Monday, the clinic opened in Bwa Nèf as always, a real testimony to the quality and commitment of our staff.  Thankfully the clinic itself was not damaged.  Ms Astrude was trapped in the Dominican Republic, where she had gone to visit relatives.  A bridge had washed away.  But there was no question that each one’s personal stories and worries would have to wait until work was done.  Ms Astrude even managed to turn up for a meeting later in the day.