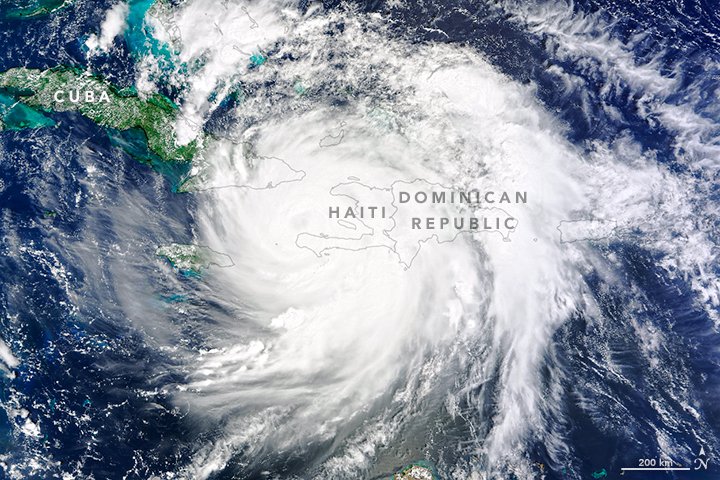 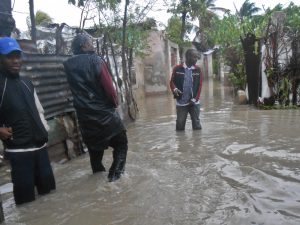 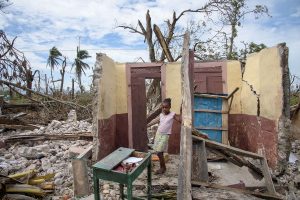 LES CAYES, HAITI – OCTOBER 14: A girl stands in her destroyed house on October 14, 2016 in a small village near Les Cayes, Haiti.  Some regions are still cut off from the rest of the country. In some cities 80 per cent of the houses are destroyed or damaged. (Photo by Thomas Lohnes/Getty Images)

Oct. 19, 2016     Hurricane Matthew struck Haiti two weeks ago, but the damage that it caused will take years to undo. Right now, more than 175,000 people are without a home, and the UN estimates that at least 1.4 million people are in urgent need of clean water, food and medicine. The southern edge of Haiti was worst hit, but the destruction was very widely spread. Friends living in the mountains, 50 miles north of Port-au-Prince, report a total destruction of crops, huge livestock deaths and hundreds of homes, schools and churches destroyed. In the south, massive relief operations by the UN and other large agencies are underway, but the need is very great.
In Cité Soleil, where the Lamp clinic is located, the damage caused by the storm itself was multiplied many times over by what took place next. Cité Soleil is a flat piece of land on the edge of the ocean, perhaps a foot above sea level. The storm surge caused the sea level to rise, flooding large portions of Cité Soleil with up to 3 feet of water (photo above). Open canals passing through Cité Soleil carry the sewage of all of Port-au-Prince to the ocean, so the water that has flooded all of these homes is deadly. We anticipate a great rise in bacterial infections in the days ahead; we hope that a major cholera outbreak will not occur but are making preparations for this far-from-unlikely eventuality. Smaller cholera outbreaks are already occurring throughout the South.
In an earlier bulletin (“Jim’s Message” on the home page) we mentioned that our clinic was spared any damage. For some reason – perhaps the presence of nearby sewage canals that channeled the storm surge further inland – the area immediately next to the clinic did not flood. It is a mystery and a great blessing. We mentioned, too, that the safety of staff families was uncertain. Happily, this fear has also resolved itself in a positive way. The roof of our driver’s home was torn off but his family is safe and are living at a neighbor’s home. The home of a former nurse of the Lamp was completely destroyed but she too is safe. In that portion of the southern arm of Haiti (called Nippes) the destruction was extreme; virtually every home is damaged or destroyed. All crops and livestock have been lost, and many wells and other water sources contaminated by the storm surge.
At least 500 people were killed during the storm itself, but it will be a desperate year for many, many people. The rainy season is nearly over; there will be no more crops planted this year. The storm toll will very certainly rise in the months to come. As always, then, keep Haiti in your heart. Please give generously — to the Lamp or any other reputable organization that is making a difference. Remember, as the Lamp byline says: we are one human family.