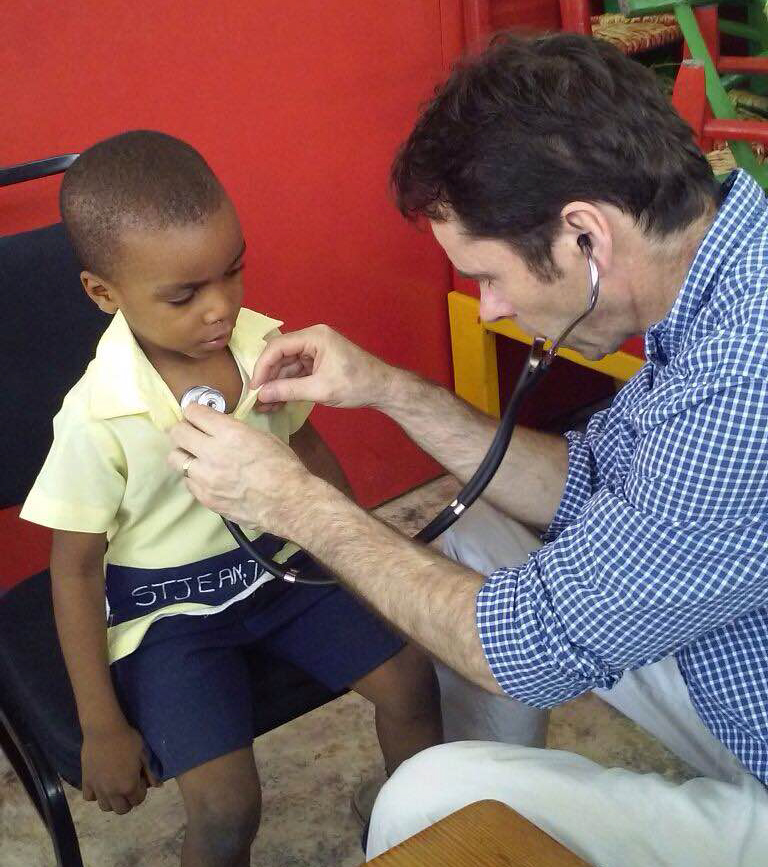 I write this from my apartment in Port-au-Prince, following an arduous but gratifying week. As is typical I am struck by the courage and dedication of Lamp staff, as well as local residents who meet incredible adversity each day and still persevere, and make progress.

In Cité Soleil, where our Lamp clinic is located, there was, until about five weeks ago, a gang war between two neighborhoods. Bwa Nèf, our section of Cité Soleil, was one of them.  Many were killed. The gangs have dispersed following a truce, and it has calmed down a lot since those skirmishes. Local residents who had moved away because of the violence are coming back, and the regular rate and rhythm of each day is now beginning to return.

On Tuesday morning our vehicle, which safely transports our staff each day to work, and which can also double as an ambulance, turned down Impasse Chavanne, a narrow dead-end street.  Past the water station where an old woman was filling up her 5 gallon bucket I noted three relatively new graffiti messages. They were clearly written, on three different buildings, in three different “spraypaintmanships”.  They messaged “Adieu Jackson” “Adieu Sandra” “Adieu Proc”. They are a final good bye to friends, someone’s sons, someone’s daughter.

I read them with a mixture of sorrow, and I must admit, a bit of fear. They are a stark reminder of the tenuous grip residents here have on life. My own grip is a lot stronger in part because of dumb luck, as my father told me more than once.  We pulled into our usual spot on the sloppy, semi-flooded mud (it’s the rainy season), and after about 25 bonjours to the cheerful staff and hopeful patients — hopeful that their maladies would be treated, as is the rule, with respect, and with quality care — and with further bonjours to the maintenance staff and their children, the x-ray tech, the lab tech, we were finally inside the walls of our center seeing patients.

When we are seeing lots of patients, and they are moving through efficiently, getting the medications and testing and care that they deserve, I feel complete. I feel like Ron Guidry, a Yankees baseball pitcher from my youth, must have felt in the middle of a game, his arm still strong and his delivery crisp, in some sort of ethereal groove that no scientist or guru yet seems able to explain, as he was mowing down batters, with a 90+ mile an hour fastball, a pitch he rocketed low and inside.  At these moments I feel like I am in the exact place that I am meant to be.

But of course such moments tend to not last.

After a few hours, the pace changed on a dime as a woman came in holding her son, 3 years old. He was lethargic, looking quite ill with his arms splayed outward. In the tropics, of course, there’s a whole lot longer list of infectious and other problems that one is susceptible to compared to North America. Poverty seems to exponentially lengthen that list. After deciding it was not cholera, I sent him to our lab, where he had some blood testing done, and we found him to have malaria. I was happy to have a firm diagnosis, and happier still that we have the medication to treat it quickly.

I asked the boy’s mother if she had any other children. No just him, she told me. His brother died at age 5 from a fever. She told me that God is protecting her, and her son, which she reasoned was why she had come to meet me today. She also said that she remained sad about the loss of her other boy, but takes solace in the belief that he is with Bondye (Bon Dieu in French).

Later in the day Claudy, a young man who had been in a motorcycle accident about 6 months ago, asked me if I wanted to visit his mother’s house again. I’d been there once, when he told me that his mother and sister were both ill and couldn’t make it to clinic. A major reason that Lamp has been successful in such a tough area is our willingness to insert ourselves into the community, and so I said yes, and off we went through the serpentine and marshy alleyways of Cité Soleil. He still walks with a crutch to steady his gait due to a fracture that healed imperfectly, but he’s walking and will soon be able to work again.  I entered the wooden and rusted tin home where his mother greeted me with a bright smile.  Her pneumonia that we diagnosed accurately on that initial house-call last Fall, with a good physical exam followed by a chest x-ray, and which we treated with quality medication, was fortunately behind her.  It was heartwarming, almost embarrassing, as she quickly put a fancy white dress on one of the youngest children because I had arrived. I became conscious of how I would feel if my own son showed up at my front door unexpectedly with my doctor, the kids not yet bathed, and the place not ready for guests. But Claudy’s mother handled it with a grace that would have made the Duchess of York proud. Claudy showed me the bed where five of his siblings sleep. His sister, whom I had seen last year for a fracture, from that same accident, slept with her mother until very recently, when she left the family for a job in one of the provinces quite far away. Claudy pointed to the holes in the roof, and the buckets they use to catch the water and prevent the bed from getting too wet. I felt the bed and suggested they find more buckets.

I asked Claudy’s mother how she was holding up, with her son, the breadwinner, out of work due to an injury. She pointed to the heavens and said “Bondye pwotege nou” (Good God protects us).

Regardless of whether one believes in God or not, the challenge for us is stark. But the impact of our efforts are even more dramatic.  That young boy with malaria is alive today because of collective efforts — yours and mine. That’s dramatic.  Claudy is walking today in no small part because of Lamp facilities — digital X-ray — and staff. His sister is able to send money home because she improved with treatment from Lamp for Haiti. His mother survived bacterial pneumonia because of Lamp for Haiti.

As ever, it’s good to write this to let you know that Lamp for Haiti remains a positive process. It’s a process that’s simple really. It’s people from different walks of life working with and for each other to make the world a better place.  It’s time to pat yourself on the back. It’s working!