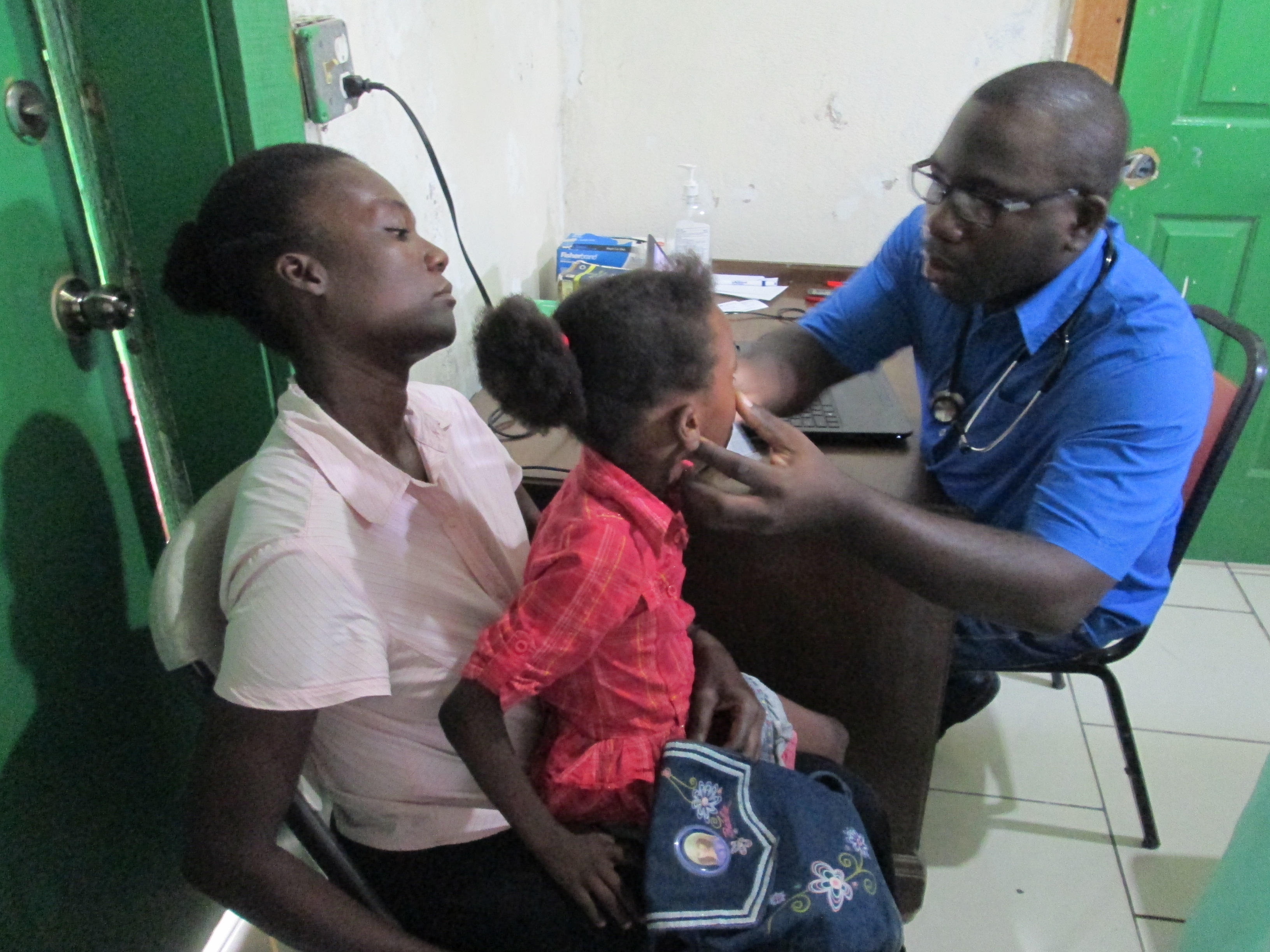 Sometimes it can be difficult to explain the value of the Lamp’s work.  We can say, for example, that our doctors see 60 patients per day, 16,000 per year.  But the statistics don’t reveal the real lives, nor the real activities of the doctors with regards to each patient.  The following letter was written by the Lamp’s In-Country Medical Director, Dr. Barrère Hyppolite. It is an inspiration to us all.

This is a success story about what we do daily in the clinic of LAMP for Haiti. It’s about the caring for a woman named Sylvia Blanc.

Sylvia Blanc is 37 years old, married, a teacher. She has 3 children and lives in the area of Cité Soleil. One day this woman came to the clinic; she had a history of low fever, pain in her chest that made her respiration painful and on some occasions, coughing and discomfort. She had already visited another health center for these symptoms but she was not satisfied with the care of this health center because she continued to suffer and this interfered with her daily work as a teacher. In this health center they did some exams for Tuberculosis and the results were negative. She received some advice from friends who recommended that she visit our clinic in Bois 9. She was desperate when she came to the clinic.

She arrived with a chest X-ray that mentioned a probable problem in the lungs, but the x-ray image was not so convincing. After her clinical examination, we note no fever and nothing special in the lungs and she continues to complain about her thoracic pain. We do some additional exams including an EKG. The EKG result gives the suspicion of a heart problem named pericarditis. Some drugs are prescribed, and after some real discussion with her, we recommend an echocardiography for her heart to have a better idea. She decides to do this because she really wants an answer for her disease. She goes to a private clinic to do this and comes back with the exam results. The exam was negative.

So I decide to start again with the process of the clinical exam and to deepen my searches. With sustained attention I detect a problem in her right lung and decide to recommend a new chest X-ray. This X-ray reveals that there is something abnormal in her right lung, seeming to be a collection of liquid. I decide to send her do a sputum exam for tuberculosis in CHAPI, another health center in Cité Soleil and schedule with her a thoracentesis, a procedure which allows me to withdraw some liquid from the lungs, a procedure perfectly controlled and mastered. When she returns to the clinic she has brought the results of the sputum test: all of the 3 specimens were negative for the evidence of Tuberculosis.

D-day, I do the thoracentesis and withdraw nearly 360 ml of liquid from her right lung. She takes the specimens to the laboratory. The specimen will be studied for tuberculosis and also for cancer. She experiences some relief of her symptoms but continues to have bad feelings about her health. Meanwhile, I have to say, every time she feels something bad she takes her phone and calls me to get my impression and also to know if she must come to the clinic to get a clinical exam from me.

The results from the laboratory come and a particular result stands out: in the liquid there are some cells named lymphocytes present in high levels. These cells are cells of the human immune system and are present in the defense of the organism against some diseases like Cancers but also Tuberculosis. Testing of the sample for Cancer will take nearly one month. However, I still suspect Tuberculosis and this suspicion will lead to the final therapeutic for this woman who is determined to find a solution together with LAMP. Thanks to an advanced workshop on Tuberculosis that I attended at THE RUTGERS GLOBAL TUBERCULOSIS INSTITUTE in New Jersey, with the support of my organization LAMP for Haiti, I have been made aware of a special laboratory test named Gene Expert that can increase the accuracy of Tuberculosis diagnosis, specially a Tuberculosis that can be negative on routine examination of sputum. Not every doctor in Haiti knows this test! Also, only two centers in Haiti have this capacity to do this test: GHESKIO Centers and Zanmi La Sante Center (Partners In Health). I discuss with her the necessity to go to GHESKIO in order to pursue this test. She accepts and I make a complete referral for her to GHESKIO.

After that I did not see her for some time. To my big surprise, during a weekday she then called me to let me know what was going on with her. She began with these words: “Excuse me, Dr. Hyppolite, to disturb you, but you know you are my doctor and I have to inform you about my actual clinical situation. They have put me, at GHESKIO, on anti-Tuberculosis drugs. They have done some tests for me and after these tests they decided to put me on these drugs.” Wow!! Tuberculosis, this big killer was there and it has nearly taken the life of this brave woman and made 3 children orphans very early without their mother!! This was so amazing and I was so proud to have pursued the steps needed in this case. I was also so pleased about the confidence that this woman showed in us and her commitment to her own health. Rather than despair, every time she needed information she called or came to the clinic and we were always responsive to her case and listened carefully.

Now she has completed the 6 month treatment of Tuberculosis (the last test done for her revealed no signs of the disease). And she has returned smiling to her job with this feeling: she has found a great answer about something considered like a curse. She also feels safer because with the treatment she will not spread this contagious disease to her family — her husband and her children – and also her colleagues. She had felt guilty and the treatment gives her the power to smile again, to be more confident in life and to fight for her family. Before the treatment she had lost some pounds but now she eats normally and has found a great appetite. With this big change in her life, she asked me this question: are you a generalist? I answered that I am an internist. And she told me, for her husband and her, I was the greatest doctor they have encountered! It was an honor for me, but I told her that I have only followed the necessary clinical steps and made a good choice in wanting deeply also an answer to her problems. I also thanked her for her patience, for her understanding about the steps necessary to make a clinical decision. Without her also this final diagnosis would not have been possible.

During her treatment, she unfortunately also developed diabetes. She has decided for this she prefers LAMP to evaluate her diabetes and help her to control it. She was very satisfied with the time dedicated by our team to explain her disease and our therapeutic approach to help her. Now she deals with diabetes and she relies on LAMP to walk with her in this great fight, and we give her this assurance that LAMP will be there for her and that our primary priority is to give our best for her and to give her the hope for a good future for her family and also herself.

This a story about the trust of a woman, who felt hopeless in the beginning, fearful of a dark future because of an unknown disease but regaining some confidence in life, believing again that something is possible, giving a great hope to her family, a husband and three children. But also this a story about the passion for health care conveyed by the spirit of LAMP for Haiti: We want to make more and something better for our brothers and sisters in Cité Soleil who are humans like us and who want to build a safe future pursuing dreams with a strong health.

All the best
Barrère Hyppolite, MD